Fairytale of New York: The Bronx

People used to say the Bronx was burning. Now they say it’s on fire. 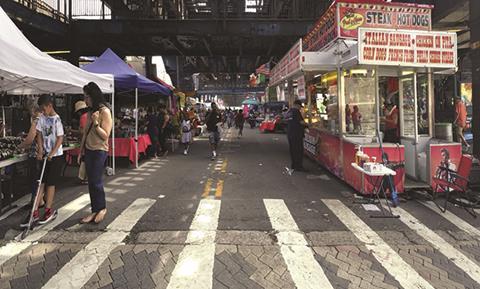 In 1977, during live televised coverage of the baseball World Series, legendary US sports commentator Howard Cosell broke away from the action to announce that a large fire had broken out in the South Bronx. It was a moment that went down in broadcasting history and marked one of the darkest chapters in the history of the borough.

Between 1970 and 1980 seven different census tracts in the Bronx lost more than 97% of their buildings to fire and abandonment, according to the New York Post. So bad was the problem a film was made about it called Fort Apache, The Bronx starring Paul Newman.

For the landlords, it was cheaper to set your building on fire and get the insurance - Kevin Draper, local historian

“Literally the worst neighbourhood in New York in the 1970s - the one where all the movies took place like Fort Apache - was the Bronx,” says New York historian Kevin Draper. “They actually compared it to Dresden after the Second World War because so many buildings were burnt out. For the landlords, it was cheaper to set your building on fire and get the insurance.”

Today the Bronx has been transformed into one of the hottest neighbourhoods in New York City. Competition for space from developers and prospective tenants has pushed prices up significantly, according to Alan Suna, chief executive of Silvercup Studios, which operates a large studio space in the area used by film and TV production companies.

“That’s not necessarily people who are just speculating. People are actually coming in and building things.”

A raft of developers are active in the neighbourhood. Somerset Partners is delivering a circa 460,000 sq ft mixed-use market rate residential building on a former ironworks site at the foot of the Third Avenue Bridge.

More ambitious still is the $300m Peninsula, a mixed-use development in the Hunts Point area featuring 740 affordable housing units, a film studio, a bakery, a brewery and 21,000 sq ft of retail space on the former site of a juvenile detention centre. Development partners Gilbane Development Company, Hudson Companies and the Mutual Housing Association of New York are waiting for re-zoning approval for the scheme.

Huge swathes of the Bronx are being re-zoned, which presents significant opportunities for residential and commercial developers.

The Peninsula, a $300m mixed-use complex slated to replace the Spofford Juvenile Detention Center in the Hunts Point section of the Bronx

The area is already starting to attract TAMI occupiers and national retailers, in addition to the significant community of artists who made the neighbourhood their home after they were displaced from areas such as Soho and Williamsburg as property prices increased.

Our new phrase is ‘the Bronx is on fire’ - it’s great, it’s hot and it’s a place where you want to put your money - John Reinertsen, CBRE

“This community has rediscovered things like the Grand Concourse [a major thoroughfare filled with art deco buildings], which was beautiful in its heyday in a similar way to the brownstones in Brooklyn,” says Dean Rosenzweig, senior vice-president of CBRE.

Development in the Bronx is still in its early stages compared with other parts of the city, he says, but thanks to strong transport links, the neighbourhood is likely to continue to grow in popularity with developers and occupiers.

“The perception from many years ago was ‘the Bronx is burning’,” he says. “But our new phrase is ‘the Bronx is on fire’ - it’s great, it’s hot and it’s a place where you want to put your money.”