It’s another triple whammy for CBRE in this year’s Property Week agency survey, with the world’s largest real estate advisory firm taking top spot in the UK, EMEA and on the global stage in the revenue ranking tables. 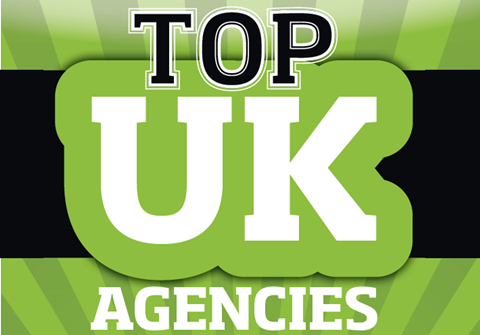 In fact, it’s pretty much ‘as you were’ in the UK, with seven of last year’s top 10 firms remaining in the top 10.

But there are two notable changes: this year has underlined the level of consolidation occurring in the market, with the usual top 40 UK firms being reduced to a top 35. And following the merger of BNP Paribas Real Estate (BNP PRE) and Strutt & Parker the enlarged group is a new entrant to the top 10.

CBRE held on to its gold medal in the UK with a 5.3% increase in UK revenue to £1.59bn. But JLL, which saw UK revenue jump almost 32.8% to just over £1bn, is beginning to threaten CBRE’s pole position.

Savills retained the number three spot, consolidating its position with an 8.4% increase in revenue to £627.1m, significantly ahead of Knight Frank, which posted £317m after a 5.7% rise.

Cushman & Wakefield (C&W) did not take part in the survey this year as it prepares for its initial public offering (IPO) on the New York Stock Exchange. However, it is safe to say that C&W would occupy the number three spot ahead of Savills in revenue terms in the UK, EMEA and globally.

Some had predicted that JLL might lose its number two spot to C&W, but with a flotation expected to value the group at around $3.5bn (£2.7bn), JLL seems safe for now with its market valuation standing at $7.9bn, while CBRE remains by far the largest quoted agency with a capitalisation of almost $17bn.

BNP PRE entered the top 10 in fifth place, as the Strutts merger last year helped the group increase its UK revenue by a whopping 158.2% to £172.2m.

“The past year has been a historic period for both BNP PRE and Strutt & Parker,” says Andy Martin, chief executive of BNP PRE. “Although not without challenge, we have successfully integrated two fantastic businesses and groups of people to create a unique proposition in the UK market, alongside the existing banking organisation. It has been tremendously exciting to build a new company that has expertise across all property asset types, together with real estate finance, wealth management and corporate banking.”

Ciaran Bird (CBRE): “Despite the political drama surrounding Brexit, investment and occupier markets have continued to perform well throughout the first half of 2018”

Capita RE&I (including GL Hearn) retained its 6th position while Colliers International improved on its eighth place last year, with a 22.7% rise in revenue to £135m climbing to seventh. Deloitte Real Estate slipped a position to number eight after a 19.1% fall in revenue to £117.9m and Lambert Smith Hampton (LSH) rose a spot to ninth after posting £100m in revenue.

The final top 10 spot went to a new entrant as Gerald Eve rose a place to tenth following a 4.4% rise in revenue.  Outside the top 10 UK firms, honourable mentions go to commercial property management and building consultancy firm Workman which entered the list for the first at number 11 with revenue of £60.6m and Bidwells which increased revenues 12% to £48m to sit 11th.

“Despite weaker-than-expected economic growth at the start of the year and the political drama surrounding Brexit, investment and occupier markets have continued to perform well throughout the first half of 2018 with continued strong interest from international buyers,” he says.

“Lettings in the main UK regional office markets in the first half of 2018 were up on the same period last year. Demand for central London offices is looking healthy, with the highest amount of floorspace under offer since 2000, at 4.3m sq ft.” 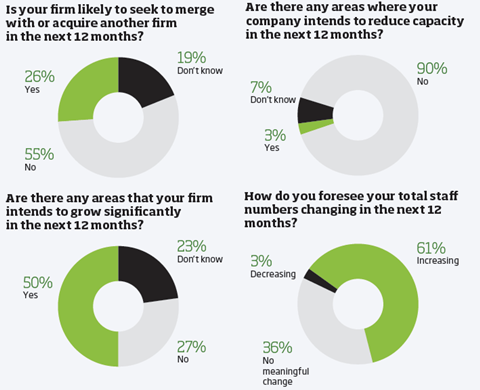 Chris Ireland, JLL’s UK chief executive, is equally positive. “Last year was a good year for us in the UK. The UK market generally surprised on the upside for occupational activity in London and the regions. London was up 10% and the regions had their strongest year ever,” he says.

“In the general investment market, around £63bn came into the UK during the year and that’s right up there with the best years. The backdrop of uncertainty around Brexit didn’t really have an impact on the market and there was a very high proportion of overseas investors, accounting for around 80% of all deals.”

Overseas markets also proved fertile territory for the agency groups judging by the European top 10. The top four European operators remain the same, with CBRE posting an 8% rise in revenue to £3.18bn, but again JLL has gained significant ground on its rival with a 20% rise in revenue to £1.969bn, more than twice Savills’ £810m. Meanwhile, BNP PRE stayed in fourth, but made up ground on Savills with a 19% rise in European revenue to £716m.

The only change in the top five came as Colliers leapfrogged Knight Frank into fifth with an 11% rise in revenue to £462m, while Knight Frank dropped one place to sixth with revenue of £376m.

However, once again everyone below JLL in second place can realistically consider themselves one spot lower down the listings once the absent C&W figures are considered. By next year, when C&W has executed its IPO, we will be able to produce a more accurate picture.

It almost goes without saying that CBRE and JLL maintain the top two positions in terms of bragging rights for being the world’s largest firms.

However, once again, JLL has gained ground on CBRE on the global stage. CBRE’s worldwide revenue increased 5% to almost £10.76bn; JLL’s growth was significantly higher, at 21%, leading to revenue of £6.131bn.

It is good news for a firm that last year was forced to face down a shareholder rebellion over executive pay and subsequently make significant climbdowns in how it will remunerate the top bosses in the future. 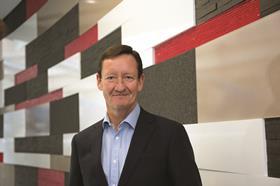 However, it is in the UK and Europe where many consider JLL needs to show some improvement to further close that global gap with CBRE. JLL’s Ireland suggests that proptech is one area where the group may be able to catch up with CBRE.

“Our focus in the UK is on organic growth,” he says. “We can never rule out some acquisitions if something opportunistic comes along, but the focus is certainly on organic growth, not on M&A. However, our new JLL Spark proptech business has been allocated $100m on a global basis and I think part of that investment will be in EMEA and the UK.”

BNP PRE also has tech investment high on its agenda. At Mipim this year, the firm unveiled its ‘holoportation’ virtual reality system, which allows multiple parties across the world to view a property simultaneously.

“This functionality is the first of its kind in real estate and builds upon the existing VR systems already seen across the industry,” says BNP PRE’s Martin. “Further to this, BNP Paribas this year completed its first real-time blockchain payments as part of its ‘cash without borders’ programme.

“We also committed to supporting start-ups in the fintech and insurtech sectors through partnerships with innovation platform Plug and Play, and StationF, Europe’s largest tech start-up incubator. Our group has a history of committing to innovation across banking and real estate and we plan to build upon the past year’s successes over the next 12 months.”

Elsewhere in the global power rankings, Colliers remains in third spot following a 9% rise in revenue to £2.095bn and Savills is in fourth, making up a little ground on Colliers with an 11% rise in global revenue to £1.6bn.

BNP PRE completes the top five, one place above Knight Frank thanks to a 19% increase to £716m for worldwide income. Despite a calamitous 70% fall in global revenue to £171m, Capita remained in seventh.

While LSH and Gerald Eve have both rise one spot to eighth and ninth respectively in the global rankings, Workman has moved into the top 10.

Globally, the top 10 agency firms rose in value to £22.32bn, a figure that will again be boosted to around £25bn when C&W joins the list next year.

Bang for their buck

When it comes to which firms’ employees produce the biggest bang for their buck, The Lorenz Consultancy produced the largest revenue per fee earner figure with £358,843 from each of its four earners.

While the top three have demonstrated the efficiencies smaller firms can bring, of the larger firms Knight Frank has risen four places to fourth, with its 1,121 earners bringing in £283,000 a head. 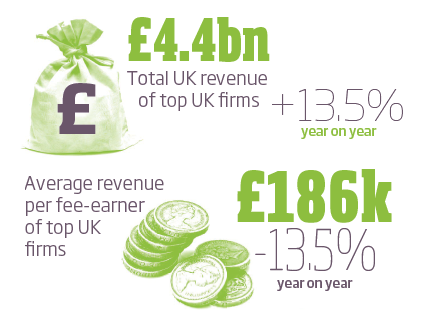 Many in the industry remain typically bullish about the future despite the UK government and Brexit negotiations being in turmoil and US president Donald Trump wreaking havoc on the world stage, but there are warning signs for some.

JLL’s Ireland says that while the first six months of this year have built on the successes of last year, there are risks for the near future. “In the office market, there is a danger that the lack of new building will lead to a lack of supply of grade-A space,” he says.

Bigger is better for C&W

On the possibility of C&W taking JLL’s second spot across the ranking in the months or years following its expected IPO, Ireland says: “We regard C&W going for its IPO as positive. It will be another big global supplier in the sector and that means more data for analysts and the likelihood of the sector gaining more coverage, which can only be a good thing.

“But as for its position in the tables, we’re not focused on size for size’s sake. We’re focused on more joined-up thinking across the business that will benefit growth across our regions.”

CBRE’s Bird is confident about the coming year, despite the looming spectre of Brexit. “Our forecast is for stronger economic growth for the remainder of this year, bringing it to 1.4% for the year as a whole,” he says. “Although Brexit continues to dampen confidence and generate uncertainty, strong growth in the US and the eurozone is providing a firm boost to UK performance.” 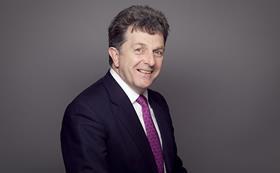 Andy Martin: ”Looking ahead we also anticipate that other sectors, such as the PRS, retirement living, student and hotels will increase their share of the market over the coming year”

BNP PRE’s Martin also believes there is room for optimism. “Logistics continues to increase in popularity to match the speed with which the industry is evolving, but more reassuringly we have also seen an increase in retail investment compared with where we were this time last year,” says Martin.

“The central London and South East office markets continue to perform well, with small, niche serviced office operators increasing their take-up share in the first half of 2018 . Looking ahead we also anticipate that other sectors, such as the PRS, retirement living, student accommodation and hotels will increase their share of the market over the coming year,” he adds.

As for the level of confidence among the survey participants, 50% of them believe their firms will grow in the next 12 months, with only 27% predicting they will not. A huge 90% claim they will not be reducing capacity in any areas and a promising 61% believe staff numbers will increase during the next year.

Perhaps most interestingly, just over one in four firms that completed the survey believe they will merge with another firm in the next year. So watch out for some intriguing M&A activity over the coming months, which could have a major impact on next year’s table.

Methodology
ll the tables were compiled using data supplied by the companies themselves. For the fourth year since its merger with DTZ, Cushman & Wakefield elected not to participate. All currency conversions were correct at the time of submission. For enquiries about the survey contact: richard.hook@propertyweek.com