The rise of the ‘grab-and-go’ food sector has helped drive up rents in prime London retail locations, according to Colliers International research.

The report reveals a strong link between the increase in the number of grab-and-go operators in prime London pitches and the growth in top rents in those locations over the same period.

Colliers says the strength of demand from operators such as Costa Coffee, Caffè Nero and Starbucksregional cities along with smaller independent coffee shops and food outlets, has heightened competition for the busiest retail pitches in the capital, creating a gap between the level of bidding for A1 food uses and other A1 retail uses.

This has made food operators increasingly competitive when securing stores that would have normally been the home of ‘conventional’ retail offers. 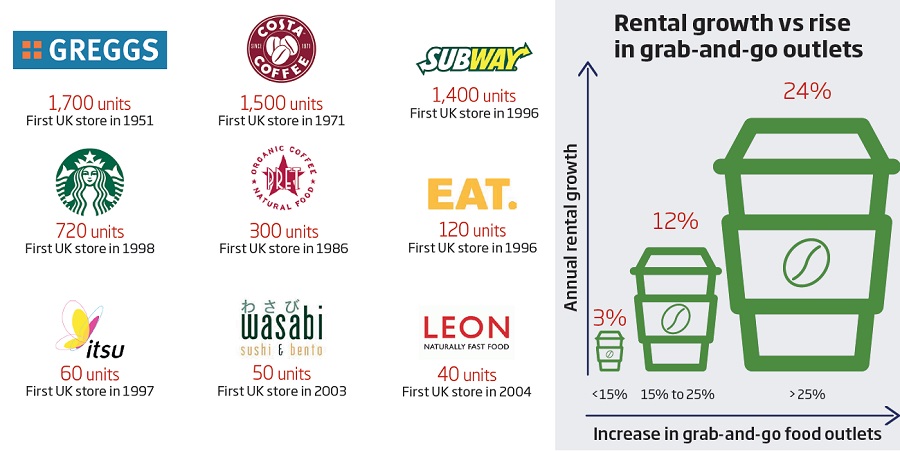 The research shows that Baker Street and Camden High Street have seen more than 30% growth in the number of grab-and-go outlets in the past two years, while top rents in those locations have increased by upwards of 20% in the same period.

“In locations where grab-and-go demand exceeds that from other retail concepts, there is clear evidence of a rental differential because food operators are willing to pay more than others to occupy these units,” says David Carlsson, director in Colliers International’s central London retail agency team.

“The rise of the coffee house in the UK has been a phenomenon and shows no signs of slowing down any time soon. In 2000, there were 193 Costa outlets in the UK, and by 2010 this had grown to more than 1,000 – equating to approximately eight new openings every month for the decade.”

Although landlords are attracted to the larger grab-and-go chains because of the strength of their covenant, they are also realising that customers are looking for more diversity and choice.

This is resulting in more independent coffee houses popping up in prime pitches throughout central London, although these are often in smaller or kiosk-style units.

“As this relatively young market matures, we are starting to see greater differentiation of brands to serve more specific customer groups,” says Carlsson. “Landlords are now more flexible and will balance covenant strength with a diversified offer.”