I really must get out more. That realisation dawned on me and possibly everyone else at last week’s RESI Convention, held on terra firma at Celtic Manor on 8 to 9 September rather than via the cloud. 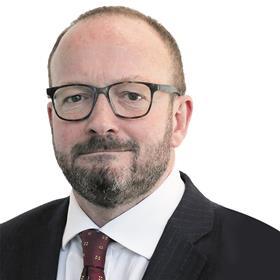 As conference host and BBC home editor Mark Easton observed, there is little scope on Zoom for that vital ingredient in commerce, serendipity.

“I’d almost forgot what a room full of people felt like – and it feels really rather good,” Easton enthused, opening proceedings in his ninth stint as compere. Conferences and other industry events fulfil many purposes, he added, “most importantly of all, serendipity: the chance meeting, unplanned conversation and unlikely connections that spark creativity and innovation”.

There was an almost childlike excitement among the hundreds of delegates and speakers at the two-day deep dive into everything residential – for many, lubricated liberally in Merlins Bar. “I’m beyond excited to have my first real audience,” Alexandra Notay of PfP Capital just about squealed at the start of her panel discussion, chaired by Property Week editor Liz Hamson.

There was an almost childlike excitement among the hundreds of delegates

Serendipity is two-fold at these supposed shindigs. As well as those unplanned conversations with strangers – almost impossible on Teams – the eclectic choice of speakers, often simultaneously on panels, can offer unexpected insights. “We don’t know what we don’t know until we know it,” said Project Etopia founder Joseph Daniels , bringing to mind the late Donald Rumsfeld’s widely ridiculed but inspired “unknown unknowns”.

He was on the same panel as Notay, on decarbonising housing, and was referring to a £40 sensor designed with Samsung that saved more in energy costs than the £8k spent on solar panels. Easton’s light-bulb-moment principle could equally apply to encountering Etopia, a developer I’d never heard of.

The ‘Powered by Etopia’ platform provides low-energy technology and construction components to small and medium enterprises that usually lack the financial or technical heft to compete on a green level playing field with big housebuilders, represented on the panel by Barratt. 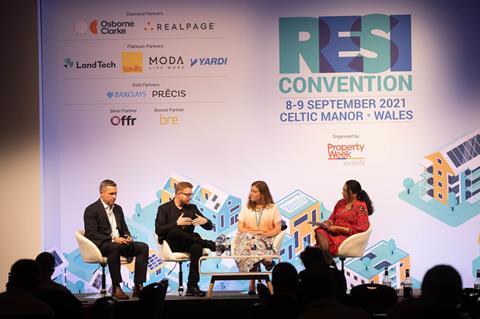 Back in the room: RESI brought home the importance of Live events

I don’t know if it has a practical future but it is well worth exploring. The same applies to an interesting spin on suburban rental that combines green energy, homes and modern methods of construction, being promoted by a delegate rather than on stage, by John Mulcahy.

Supporting MMC and SMEs was a five-pronged policy thrust outlined in a (virtual) keynote by former housing secretary Robert Jenrick. But the overwhelming theme was private ownership’s pre-eminence in government housing policy. There was support for affordable housing and a nod to build to rent, an abiding theme of this and past RESIs, but delegates may have queried how committed he is: he referred to the tenure as ‘rent to build’.

“Refreshingly blunt” was the opinion of many attendees to Jason Honeyman’s characteristically bluff response to Easton’s question during the CEO debate as to whether Bellway would dump boilers for heat pumps on its sites. “No” was the response, to the apparent chagrin of the broadcaster. The simple reason is there just is not the capacity in the nascent UK heat pumps market. Larger and slicker housebuilders are promising great strides in carbon reduction; the head of Britain’s fourth biggest suggested we won’t be getting there in a hurry.

I like a good chart, and there were plenty in the data presentations from Savills and Rightmove, the latter deploying eye-popping market intelligence, including an hour-by-hour collapse in its web traffic of Boris Johnson’s lockdown announcement on 23 March 2020.

An immediate brake on housing activity, of course, quickly gave way to a stamp-duty-holiday-induced stampede and a supposed exodus from city centres, particularly London, to the country. Rightmove’s presentation and one from Savills suggested the tide may be turning in the move to the country along with evidence of a possible turnaround in the long decline of the central London rental market.

One slightly more bizarre side effect of the pandemic, Rightmove revealed, was that the most popular filters among rental viewers was “eco-friendly” and “pet friendly”. Each to his or her own. My view is sod pets. I prefer humans.