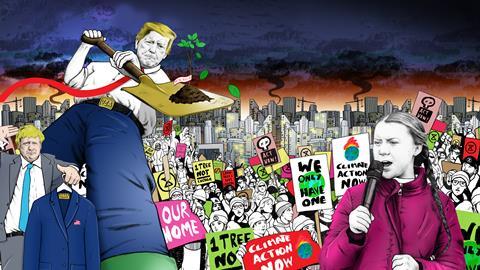 The Climate Crisis Challenge: be the solution

There has been plenty of talk about the climate crisis. Now its time to walk the walk, says Liz Hamson, as Property Week and UKGBC join forces to launch the Climate Crisis Challenge.

Australia is on fire, Brazil and Indonesia are experiencing deadly floods and Antarctic glaciers are melting at an unprecedented rate, threatening to submerge London and New York.

It sounds like a pitch for the mother of all Hollywood disaster movies, but this is not fiction. This is the terrifying reality we are now waking up to as a result of man-made climate change.

Our consciences pricked, or more accurately skewered, by teenage eco-warrior Greta Thunberg and organisations such as Extinction Rebellion, we have looked on slack-jawed as apocalyptic event after event has played out on the daily news and the impact of climate change on human, animal and plant life has become devastatingly clear.

It is little wonder that at Davos last week Donald Trump’s cynical dismissal of the climate change “prophets of doom” was given short shrift and what resonated was Thunberg’s stark warning that “our house is still on fire”.

But while global awareness of the climate crisis has never been higher and the UK government has been rightly lauded for becoming the first major economy in the world to legislate for net-zero greenhouse gas emissions by 2050, actions speak louder than words and, unfortunately, the opposite is true at the moment.

You can’t hear yourself above the cacophony of companies launching climate strategies, but the reality is that net-zero-carbon buildings are currently few and far between.

The problem is that while no one in the property industry disputes the urgent need to tackle the climate crisis, few understand exactly what to do or how to do it. That is why Property Week has joined forces with the UK Green Building Council (UKGBC) to launch The Climate Crisis Challenge.

In the months leading up to the COP26 climate change summit in Glasgow in November, we will be bringing you regular in-depth analysis, thought leadership and content offering insights, information and advice on how to reduce your environmental footprint and tackle the climate crisis head on.

We are also calling on you to rise to The Climate Crisis Challenge and inviting you to participate in an exciting itinerary of events and initiatives to support our campaign. 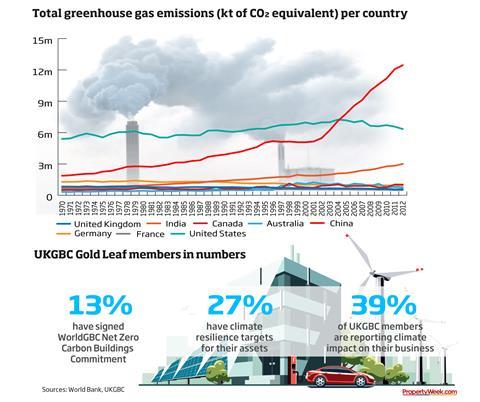 We appreciate none of this will be easy – we wouldn’t have a crisis if it were – but we have passed the point where doing nothing is an option, if it ever was. As JLL EMEA chief executive Guy Grainger puts it bluntly in our climate-special comment section, the time has come to “adjust your business model or die”.

He is not overstating the dangers of failing to act now on the climate crisis. Occupiers, investors and, increasingly, the government are all demanding action – and are already threatening not just to favour those who do act over those who do not, but to take punitive measures against the latter.

Many would argue they have just cause. The catalyst for the campaign was a couple of statistics that have been reeled off many times yet lost none of their power to shock. The first is that an estimated 40% of the UK’s total carbon footprint is attributable to the built environment, through its energy use and embodied carbon. The second is that the construction industry is responsible for producing nearly 60% of the UK’s waste, generating more than 120 megatonnes every year from construction, demolition and excavation activities alone.

In short, the built environment is a huge part of the problem. That, of course, means it could be an even bigger part of the solution. The good news is that it is already starting to be. According to UKGBC’s research into sustainability commitments made by 44 of its Gold Leaf members, more than three quarters have now publicly committed to reducing their scope 1 and 2 emissions and at least six have set their end goal at net zero carbon.

However, the industry could and should be doing more. Just 13% of the 44 have signed up to the World Green Building Council (WorldGBC) Net Zero Carbon Buildings Commitment, which commits them to achieving net zero carbon in operation in all buildings under their direct control by 2030.

In light of growing corporate disclosure requirements from the likes of the Task Force on Climate-related Financial Disclosures (TCFD), it is also surprising – and disappointing – that only 27% of these firms have set a climate resilience target relating to the assets they develop, own, manage and/or occupy and that only 39% are publicly reporting on the possible physical impacts of climate change on their business (albeit up from 26% in 2018).

This has to be the next step, says UKGBC chief executive and guest editor of Property Week Julie Hirigoyen. “It’s fantastic to see so many firms in the built environment industry committing to mitigating their contributions to climate change now,” she says. 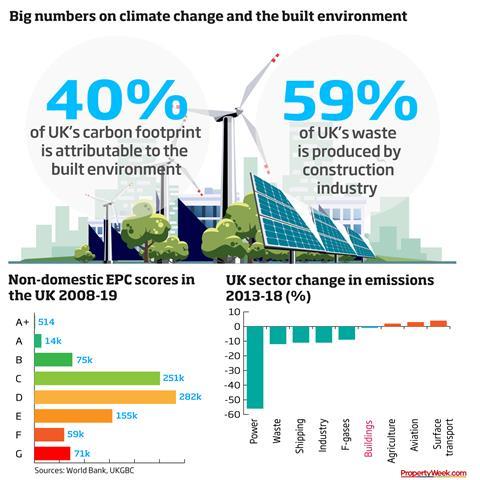 “But for an industry sector right at the sharp end of the impacts of climate change, both in terms of the physical risks from extreme weather events and the rapid transition required to achieve net zero, our research shows there is much more to be done on climate resilience and adaptation in the sector and on net-zero-carbon buildings themselves.”

The message coming from organisations such as UKGBC is loud and clear – the time to act is now.

The industry should not just feel compelled to tackle The Climate Crisis Challenge by its moral and ethical obligations. There is also the looming threat of government intervention and legislation to consider.

The UK government’s Green Finance Strategy aims to ensure that all listed companies and large asset owners disclose environmental and climate change information in line with TCFD recommendations by 2022.

The purpose of the TCFD, which some financial analysts believe could be a game changer for the industry, is to “develop a set of voluntary, consistent disclosure recommendations for use by companies in providing information to investors, lenders and insurance underwriters about their climate-related financial risks”.

The upside is that for every risk posed by climate change, there could be a considerable investment opportunity. While the built environment is responsible for a huge chunk of the national carbon footprint, it also presents one of the most cost-effective opportunities for our economy to decarbonise.

A growing number of investors certainly think so. Morningstar data suggests there has been 2,500% growth in environmental, social and governance (ESG)-focused investment since 2014 as sustainable investment becomes a no-brainer for the new breed of conscious capitalists. The flood of money seeking such investments is only set to grow, fuelled by this younger, more environmentally aware generation of investors.

According to a new global survey published earlier this year by deVere Group, 77% of millennials cite ESG investing as their top priority when considering investment opportunities.

UKGBC is now preparing for an unprecedented decade of action

They won’t look kindly on buildings that compromise on their green credentials. In MSCI’s 2020 ESG Trends to Watch report published earlier this month, it warns that property owners could suffer a significant financial hit if they fail to kickstart their journey towards net zero carbon soon.

“As the market continues to mature in 2020, green buildings may become the new normal, compressing the market into one where a ‘brown discount’ is put on to buildings struggling to meet new energy standards,” says the report.

As we report in our analysis this week, there is not much evidence yet of the much-touted green premium, but there definitely is of the brown discount. So expect to pay the price if you own a building that needs an injection of capital to retrofit it, or if operating costs have to rise to ensure the building is able to meet carbon emission standards, or if the building fails to attract tenants because they are not satisfied with its green credentials. 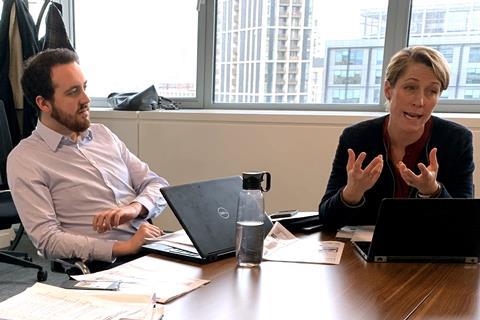 UKGBC is a property industry-led network with a mission to radically improve the sustainability of the built environment.

A charity with more than 400-member organisations spanning the entire value chain, it represents the voice of the industry’s current and future leaders who are striving for transformational change.

It aims to inspire, challenge and empower its members, helping them to identify and adopt the most sustainable, viable solutions. It engages its members in advocating a progressive message to government, informing and influencing policy.

UKGBC’s vision is a sustainable built environment that enables people and the planet to thrive by:

To find out more about the important work of UKGBC and to become a member, go to ukgbc.org or contact munish.datta@ukgbc.org.

Fortunately, companies that act now can head off many of these issues at the pass, which is exactly what you will be able to do if you rise to The Climate Crisis Challenge. For its part, UKGBC is on a mission to radically improve the sustainability of the built environment by transforming the way it is planned, designed, constructed, maintained and operated. Like Property Week, it hopes The Climate Crisis Challenge will help inspire and enable the industry to achieve higher standards, influence government policy and advocate for a better built environment.

“While the past decade has been about raising awareness of sustainability, UKGBC is now preparing for an unprecedented decade of action, focused on sourcing and disseminating practical solutions and ‘how to’ guidance to achieve sustainable buildings,” says Hirigoyen. “To this end, we are delighted to be partnering with Property Week for an exciting campaign that will bring to life these solutions and encourage their adoption at scale and at speed.” 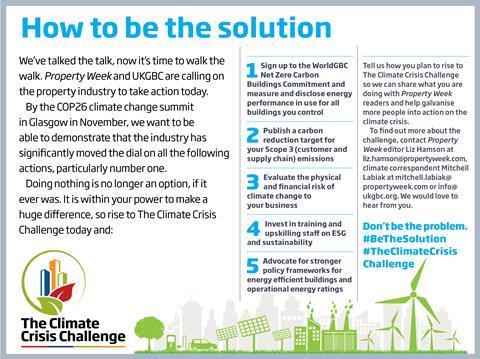 UKGBC is an active member of the WorldGBC and, with Property Week, it is now calling on everyone in the property industry to sign up to the WorldGBC Net Zero Carbon Buildings Commitment.

Hirigoyen explains why this particular commitment is so important. “With hundreds of pledges on net zero emerging every day, the Net Zero Carbon Buildings Commitment provides a clear and simple call to action for all organisations – big and small, across all industry sectors – to consider the contribution that their workplaces make towards the climate crisis,” she says.

“While this is just the first step, it’s important to start with what we can directly control. If all businesses did this, market demand for net-zero-carbon buildings would be indisputable and the property industry would have to respond by delivering such assets. It would be a truly virtuous circle.”

So be part of that virtuous circle. Share with us what you are doing to tackle this critically important issue and rise to The Climate Crisis Challenge now. Don’t be the problem. Be the solution.