In the early 1980s, Manchester was in decline, the city’s traditional industries were dying off and the population was falling.

Fast-forward to today, and the city has been transformed. Major development projects such as Spinningfields and MediaCity have changed the face of the city and many others like Mayfield are in the pipeline.

GL Hearn brought together a panel of experts to discuss the factors behind Manchester’s success, such as civic leadership, long-term planning and investment in public transport, and what other cities can learn from it.

The panel also discussed how to secure the continued success and growth of Manchester and the key challenges that city and town centres face today, including an over-reliance on retail.

In the early 1980s, Manchester was in decline, the city’s traditional industries were dying off and the population was falling.

Fast-forward to today, and the city has been transformed. Major development projects such as Spinningfields and MediaCity have changed the face of the city and many others like Mayfield are in the pipeline.

GL Hearn brought together a panel of experts to discuss the factors behind Manchester’s success, such as civic leadership, long-term planning and investment in public transport, and considered what valuable insights other cities could learn from it.

The panel also discussed how to secure the continued success and growth of Manchester and the key challenges that city and town centres face today, including an over-reliance on retail. 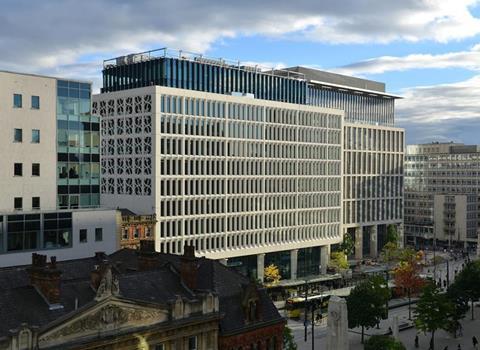 What are the key factors behind Manchester’s regeneration?

ES: I’ve lived here for 33 years and I’ve worked for the council for nearly 20 years. I came to Manchester from Northern Ireland to escape a war basically and back then Manchester was not a great place. In fact, I would say back in 1986 Belfast was a better city than Manchester. What’s happened in the past 32 years is the death and rebirth of a city.The essential DNA of that has been very strong civic leadership that has embedded itself in a collaborative partnership-based approach to transforming the fortunes of the city and clear recognition of what was required to change its trajectory.

It all kicked off with the 1984 city centre plan, which was the most transformative document ever written about the city. It talked about things like the need for light rail systems and it talked about the need for residential growth within the city centre. That plan laid the foundations for so much of what you see today and people still reference that document in the town hall to see what was said about parts of the city we’ve yet to get to.

DS: Manchester was a mess. I remember when I joined English Tourist Board in 1986 and one of the first things I did there was a joint venture with Sir Howard Bernstein and Ted Kitchen [at Manchester City Council], Trafford and Salford councils for Castlefield and up to Salford Quays. That was the first time I sensed there was a real move from the city to do things. You wouldn’t recognise Castlefield at the time. It was just scrap yards. Nobody would go there. In fact, very few people came to the city centre. So the move to change was because of the personalities at the time really wanting to move things forward. I’ve been involved with Manchester ever since and when you look at what’s happened it is about the personalities in the city and their willingness to drive things forward and work in partnership.

So the way Manchester has developed over the past 30 years is definitely down to the work of individuals rather than product of economic forces?

DSM: I think definitely leadership as opposed to broader economic forces. I met an econometrician from Oxford Economics who had a forecast model looking at Liverpool, Manchester and Hull in the 1980s. It was a forecast based upon underlying economic indicators in 1980 and predicted that Manchester and Hull were going to follow a very similar economic trajectory. The long-term infrastructural and economic ingredients were very similar, so it can’t just be about location or basic infrastructure. It’s about the quality of the plan and the leadership behind the plan.

DM: What’s different here is the courage to be innovative such as leading the way in devolution to city regions. There is something about the culture of place. You can’t necessarily lift and replicate what happened in Manchester somewhere else because Manchester’s strength is around its culture, its innovation, its history and its heritage. 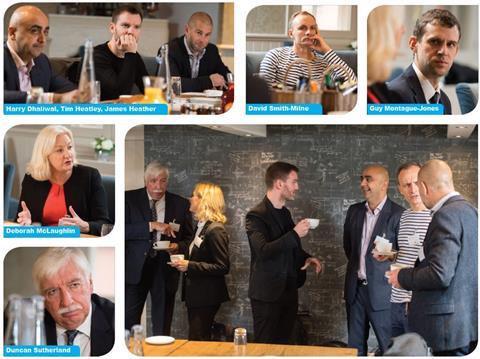 GL Hearn assembled a strong collection of speakers in Manchester

And the assets that we’ve got in the city; we didn’t knock all the mills down and build a new city. We’ve embraced the culture and the assets so that developers such as Tim are bringing back some of the most beautiful buildings in the city, respecting the heritage. Manchester has also been courageous in not accepting the first investment that lands on its lap but choosing investment that is really going to add value long term.

TH: That’s something Manchester does well – ensuring those who are developing the city have a long-term horizon. Other cities could be accused of having poor-quality developers and architecture that’s not added much and actually puts other long-term developers off because they know they are going to be undercut by low-quality product.

Is there a blueprint that other towns and cities can employ?

TH: For me it was relatively straightforward because I’ve grown up here seeing great architects and great developers, people like Bruntwood, Urban Splash, Ask and Muse, delivering fantastic buildings. So when other places say ‘can you come to our city and bring some of that Manchester stuff you do?’ I say ‘sure, I’ll bring my little black book of Manchester rules’. But really, you can’t masterplan a swagger or an attitude. It’s in the spirit of the people here. It’s hard to say what the checklist is.

But are there at least some elements that other places can learn from, such as having a clear long-term plan?

DSM: The whole landscape of city development is littered with strategies and failed delivery. It’s not just about the vision, it’s the tenacity to squeeze the pips out of everything. That’s what the city council is pretty good at. You look at Oxford Road – there was huge investment in hospital infrastructure, huge investment in the university. The city council didn’t just observe and enjoy that happening. The city council put a strategy together and squeezed the benefits out, economically, socially, culturally and from a retail perspective. That’s what you don’t see in a lot of other cities.  Actually, you often see quite passive civic leadership.

TH: When talking to chief executives of other cities about the black book of Manchester rules, one of things you’ve got to deliver is projects in areas where the pizza delivery man won’t go – places like Salford Quays. That’s where Manchester has been brave enough and bold enough to tackle. 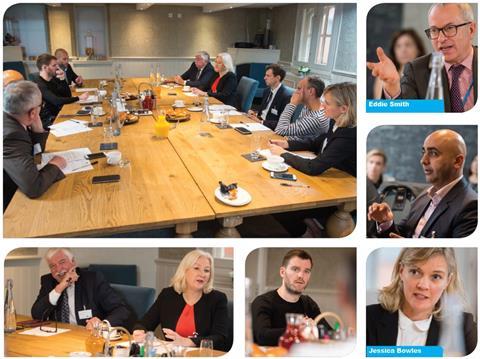 DM: It’s also about understanding the commercial world and its drivers. Not all places understand how the sector works. The city’s leaders always meet people and talk to them at great length to really understand where they are coming from and what their drivers are and the value they can add. It is something that’s pretty unique here.

DS: Members have got to understand that the private sector has got to make a profit. When I first started that wasn’t there. If you wanted to do a joint venture, there was a view in local authorities that making a profit was a bad thing. That was what changed in Manchester in the 1980s – the acceptance that to get growth you needed partners and they weren’t going to invest unless there was a return there.

How can regeneration be spread from the city centre to the suburbs and the surrounding towns?

DM: At a local level, the tram system extending to the surrounding towns was a significant investment that is really starting to bring life to those town centres that have been struggling. It brings places much closer to the city centre. You will see those town centres getting more residential development and more regeneration. You can already see land values starting to increase.

JB: There’s an opportunity to reshape the uses in those town centres. This needs a mix of residential and some commercial schemes that stack up. That’s not necessarily grade-A office space; in fact, it invariably won’t be. But it is about creating really interesting spaces that go with the grain of the businesses in those areas. It has to draw on all of Manchester’s ability to do partnerships.

How do you tackle the oversupply of retail in a lot of city and town centres?

JH: People are too slow to accept change. Some of the town centres around the city core are fantastic and have the most amazing buildings. Actually trying to focus on retail and trying to keep hold of that retail centre is probably wrong. Does it matter if you convert some of those old retail units into apartments and people come back and live there? That’s part of the city growing and maturing. If they are going home and spending money near home, that’s going to encourage the development of local cafés, breweries and bakeries. It becomes a virtuous circle.

TH: I’m a great believer in town centres but they’ve lost their way. The much-trumpeted example is Altrincham. Now it’s not every town that can have a trendy food market but it does reflect a wider trend. Everything used to be about convenience. You would drive to your supermarket and do all your shopping in one place. But now it’s more about experience. Town centres can offer that experience, it is something they can capitalise on. 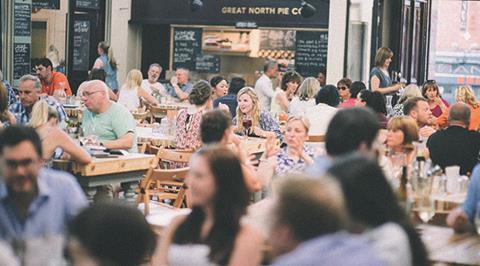 ES: Altrincham is fascinating. You had the most affluent community living around it but it was dead. You get one individual who comes along with a brilliant idea and works with the council. The catalytic effect that one individual has had on the town centre can’t be understated. Other places like Ramsbottom are also thriving. But yes there are places that are suffering. They need to be fundamentally rethought. We need to think about the purpose of those places. For me it’s about living and work. You have to be brave and think long term.

DM: You need agility as well. You can have your plan but have to be aware the way we work and live is changing so quickly you can’t set in stone what your town centre is going to look like in 20 years. For example, people work more flexibly than we ever thought – having more flexible workspace available would be a great use of under-occupied retail.

What are the key challenges for Manchester going forward and how can the city ensure it remains successful?

ES: There’s a brutal fact confronting Manchester – we are going to run out of land. The city is going to run out of land in 15 years. We think that by the end of the 2220s we will have close to 700,000 to 750,000 people living in the city so the surrounding towns will have to play a key role in sustaining the city regions growth trajectory. They need to ensure they’re creating the right employment opportunities that can no longer and should no longer be served from the city centre and provide places for people to live. The role of public transport systems in that cannot be underestimated.

HD: Tech is going to be really important – everything from the rise of autonomous vehicles and electric cars to ways of working and shopping. The whole of modern living is on pendulum swing. The vision that we talk about in 1984 was 20 years ahead of its time. Whatever is written now has to be 20 years ahead again to keep Manchester and the surrounding region prospering.