View from the top: Andrew Jones, head of LondonMetric

The Rule of 72 is one of the key guides for property investors. It’s a clever but simple mathematical trick that shows you how long it will take for you to double your money at any given rate of compound interest – and Andrew Jones swears by it. 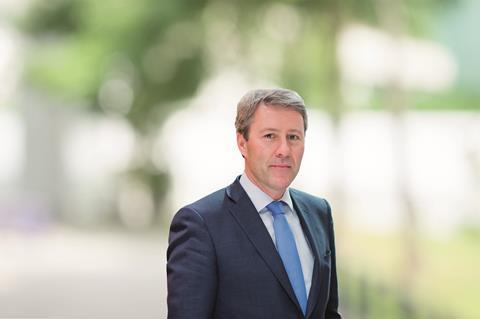 The chief executive of real estate giant LondonMetric is so focused on the rule – which shows you, for example, that if you deliver annual returns at 9%, you will double your money in eight years – that he even has it printed on the back of all his business cards.

It means he is prepared to sit on safe assets that return stable levels of income over a long period, rather than chasing blockbuster deals with higher rewards and higher risks.

Resisting the temptation to be too active has often kept LondonMetric out of the headlines, but since the group was formed by a merger of London & Stamford Property and Metric Property Investments in 2013, it has increased the assets it manages from £1.2bn to £2.2bn.

Through £4bn of sales and acquisitions, Jones has navigated the FTSE 250 group away from retail property and into urban logistics and distribution centres. With the current economic crisis causing even more distress for high-street giants, the move has been more than vindicated.

“I’ve been relatively bearish on retail for a while,” says Jones, who was head of retail at British Land during the last financial crash.

“We got ahead of ourselves in terms of rents, certainly during the noughties, and the structure of long leases and upward-only rent review clauses meant that as the world started to pivot towards online shopping, we didn’t have the mechanisms in place for those rents to fall to the levels they should’ve done.”

So how low does he think retail rents will go? “I’ve not sought to call a bottom because it implies that the disruption and the penetration online has plateaued – and it quite clearly hasn’t.”

Despite the pivot to logistics, retail parks still account for a little under 4% of LondonMetric’s property portfolio and like many commercial landlords in recent weeks, Jones has been having difficult conversations with tenants over how much rent they ought to pay during the lockdown.

“The vast majority of our tenants have been terrific,” he says. “But it’s a bit difficult to be sympathetic to large multinational companies listed on the London or New York Stock Exchange with billion-pound valuations who just say to us: ‘We are not paying’.”

The Sunday Times recently reported that LondonMetric had been preparing legal action against Mike Ashley’s Frasers Group over unpaid rent at an Evans Cycles outlet.

However, Jones says: “I don’t believe they are the worst culprit by any stretch of the imagination and I’m sure we will find a solution to that. People shouldn’t pick on Frasers. I can be sympathetic with some of their challenges to be honest, more so than with some other retailers.”

So is Jones preparing more legal challenges? “I would say there are four or five [retailers] not engaging with us. It is not even that they are not engaging on a sensible basis; they are just not engaging,” he says.

“A relationship requires a two-way conversation and engagement that is not one-sided. To me, that’s not a relationship, it is something more akin to bullying.”

Jones says he is keen to help struggling tenants who are fighting for survival, but not large public companies that could pay their rent by raising money through the stock market.

Last week, sofa chain DFS went to investors to raise £64m, for instance. “One of our biggest relationships is with DFS and they have behaved impeccably,” he says.

Listed occupiers with a strong balance sheet who are refusing to pay rent could even hand over a slice of the company, suggests Jones. “I would happily take shares in some of those companies to settle their debt,” he says.

“We just want to engage with people. What we won’t accept is a simple: ‘We’re not paying rent and offering anything up.”

For the small minority of tenants that are not engaging Jones has a stern message: “Without a doubt our memories will be long and we know what our remedies will be.”

The company’s remaining retail assets may be causing Jones a few headaches at the moment, but one part of the LondonMetric portfolio that he is optimistic about is roadside.

In November, LondonMetric snapped up almost £15m of “long-income road assets”, ranging from car washes to petrol stations. For some of those properties Jones sees alternative uses with a higher value, such as residential.

The rise of convenience means that drive-through coffee and food outlets also have growing value, he adds, noting how resilient they are to the threat of e-commerce. “The internet is not going to disrupt how people drink their coffee or change their tyres,” he says.

Speaking more generally about the challenges facing the real estate industry, Jones believes the Covid-19 pandemic is “simply accelerating trends that were already in the system”.

These trends include the migration of bricks and mortar retail to online shopping, which he saw coming before most in the market and underpinned LondonMetric’s pivot away from retail to logistics.

As a result of this shift, the company is in a much more comfortable position today than many of its real estate peers.

Jones’ business icon Warren Buffett would be proud. So what does Jones think Buffett should be doing in the current climate?

“He’s been unbelievably disciplined in the past few years and continued to build his cash mountain, so I suspect he’ll look to deploy it,“ Jones surmises. “These sorts of moments are what Warren is designed for.”

They are also the moments Jones and LondonMetric appear to have been designed for.