Romania is refusing to pay £75,000 in rent to a landlord for the country’s former ambassador’s residence near Hyde Park because of a “gentleman’s agreement,” according to The Times. 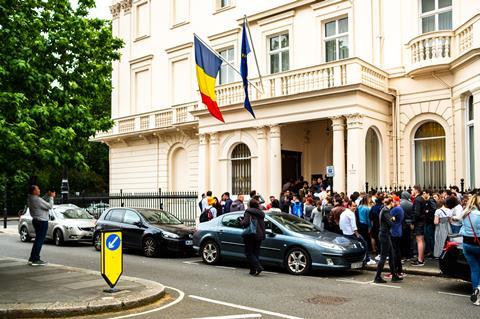 May 26 2019, a line of voters waiting outside the Romanian Embassy in London to vote in European Parliament election.

On 11 December 2019, the High Court ordered the Romanians to pay landlord Christopher Christos the final six months of a £12,000-a-month lease plus £3,660 in legal fees after he took the country’s UK embassy to court.

The home at 18 Hyde Park Street served as the ambassador’s residence from April 2008 to April 2019 when the lease expired.

The country’s diplomats argued that they were told by Christos they could end the tenancy six months early and that a “gentleman’s agreement” had been reached with Dan Mihalache, ambassador of Romania to the UK. Christos sent Mihalache an order to quit the premises after Romania stopped paying rent in December 2018, however Mihalache stayed until the lease expired.

“They are giving me the runaround and think that because of diplomatic immunity they are untouchable,” said Christos, who bought the property in 2007 for £2.8m. “But I’ve got a mortgage to pay off.”

“The ambassador of Romania in London and the owner of the property on Hyde Park Street had a gentlemen’s agreement during a meeting in June 2018 regarding the termination of the rental contract,” a spokesman for the embassy told The Times.

“Following this agreement, the owner was also notified in writing by the embassy of Romania about the termination of the contract with a grace period of three months.

“During this agreed period of three months the Romanian embassy continued to pay the rent for the respective property, as agreed with the owner. The landlord didn’t inform us about any changes in his position, so his decision to ignore the termination agreement and to claim breach of the contract came surprisingly.

“At the end of the three-month notification period, the Romanian Embassy vacated the space, the residence of the head of the mission being relocated.”

In late 2018 Property Week mapped London’s embassies and wrote about the complications that they can pose as tenants.