Two professional rugby players have launched a flexible workspace brand that is set to open in some of the UK’s best known sporting venues, including Wembley Stadium. 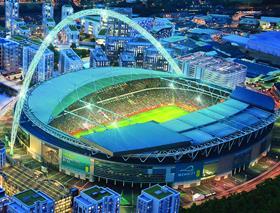 Hopper and Dickson will open their next workspace centre at Wembley Stadium in the new year following an agreement with the private owner of two corporate boxes.

“The Wembley opening will be in two super-boxes with views over the pitch,” said Dickson. The pair plan to open a number of other centres.

“We’re looking to open in some of the most iconic sporting venues throughout the UK,” said Dickson. “We’re aiming for at least 10 locations.”

The rugby players have set their sights on opening workspaces at Old Trafford in Manchester; Murrayfield – the home of Scottish rugby; Welsh rugby mecca the Principality Stadium in Cardiff; the home of the British Formula One Grand Prix in Silverstone, Northamptonshire; St James’s Park in Newcastle; and horse racing venue Goodwood in West Sussex.

“We’re looking at a membership model,” said Hopper. “We’re targeting around 2,500 members who will be able to gain access to 10 venues across the country.”

Iconic Workspace is looking to raise cash to fund its expansion plans.

“We’ll begin a fundraising to seek around £2m early in the new year so we can fund the rollout and a major marketing campaign.”