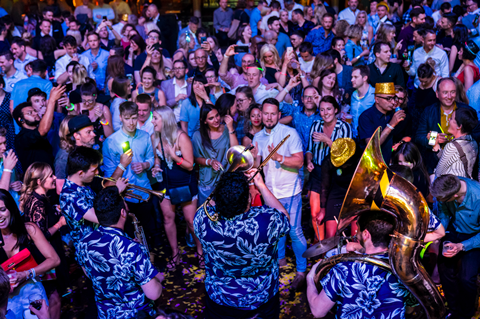 Metropolis is still wincing from wounds incurred last Thursday throwing some not so killer shapes at Urban Splash’s brilliant 25th birthday bash at the Albert Hall in Manchester.

It really was a night to remember as some of the biggest names in property joined Tom Bloxham and his team to sup on ‘It Will Never Work’ ale and bust some moves to DJ sets from the likes of The Craig Charles Funk & Soul Club and Graeme Park.

Everyone who was anyone was there – although some nearly weren’t. A little birdy tells Metropolis that Sir Richard Leese almost got turned away because of the ‘strictly no ticket, no entry’ policy and had to talk his way in.

There was no such ‘no entry’ policy with regards to the ladies loos, however. Let’s just say it was more of a unisex facility by the end as a stream of men came in to check out the DJ and glitter makeup station or grab some glow sticks. Urban Splash’s Simon Gawthorpe was certainly feeling the love afterwards, prompting a delighted Chris Shaw to remark: “Well there are two sentences I never thought I would hear my MD say: ‘Loved the ladies toilet! How difficult is glitter to get off!!!!’”

Yup, it’s difficult, but what you have to remember is how good it looked on. Great party, people!