The V&A has announced a partnership between the museum and the Smithsonian Institution and unveiled plans for its new V&A East complex in Stratford. 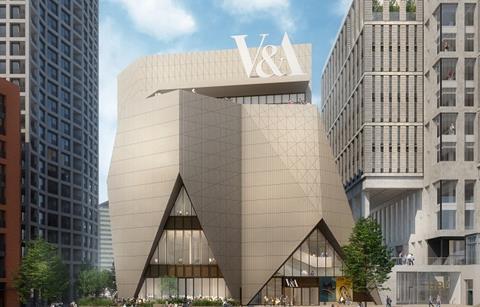 The V&A museum at Stratford Waterfront

V&A East will create two interconnected sites at the campus at Queen Elizabeth Olympic Park comprised of a new museum at Stratford Waterfront and a collection and research centre at Here East.

They will open in 2023 as part of East Bank, the £1.1bn culture, education, innovation and growth campus announced by London mayor Sadiq Khan earlier this year. V&A East will also host a unique partnership exhibition with the Smithsonian Institution, the largest museum and research complex in the world.

The research centre at Here East will be designed as ”an immersive cabinet of curiosities”, and act as a purpose-built home for 250,000 objects and an additional 917 archives spanning the breadth of the V&A’s collection from fashion and textiles to painting, sculpture, and architecture. Highlight exhibitions announced for the openinginclude Frank Lloyd Wright’s 1930s office for Edgar J. Kaufmann – a unique and complete 20th-century plywood interior – and a 15th-century marquetry ceiling from the now-destroyed Altamira Palace near Toledo, Spain, which will be resurrected within the centre as a real architectural element above a new public space. 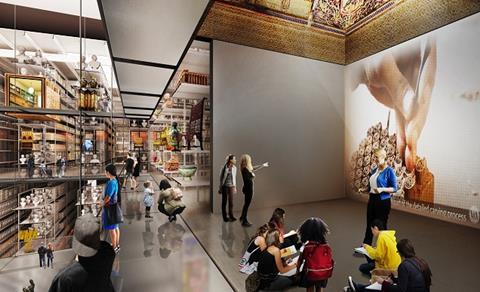 At the interconnected Stratford Waterfront site, a five-storey museum designed by Dublin- based architects O’Donnell + Tuomey will contain two galleries to showcase the full range of the V&A’s collections and a programme of major exhibitions will sit alongside new commissions, installations and interdisciplinary collaborations and projects.

The museum’s inaugural exhibition in 2023 will be a world-first co-production by the V&A and the Smithsonian, after which the latter will present one in four exhibitions at the museum.

The museum at Stratford Waterfront will sit alongside UAL’s London College of Fashion, a new, mid-scale venue for Sadler’s Wells, and new BBC studios for performance, rehearsal and broadcast – its founding partners in the East Bank project as part of the legacy of the London 2012 Olympic and Paralympic Games.

The Mayor of London said: “I’m truly delighted that the V&A - and its partnership with the Smithsonian Institution – is one of the world-renowned organisations working alongside us to drive forward growth and inspire more young Londoners to take up creative careers.By bringing large parts of its vast programme to two new sites at East Bank, the V&A will open up access to the world’s greatest collection of art, design and performance.”

Gavin Poole, chief executive of Here East, added: “Since its inception, the Queen Elizabeth Olympic Park has been a global platform to showcase the very best of the UK. Here East has continued this spirit by curating a community of creative businesses, world-class academics and technology entrepreneurs who are pioneering the future of British business. V&A East will be a perfect partner for the campus, bringing a great British brand to East London and reimagining the way the British public can interact with one of the finest collections in the world.”