Covid-19 didn’t just put people behind closed doors for the best part of two years – it put them online. Internet use exploded, with 62.5% of the global population having access to the internet by January 2022, up from just 26.6% in 2010 (DataReportal). 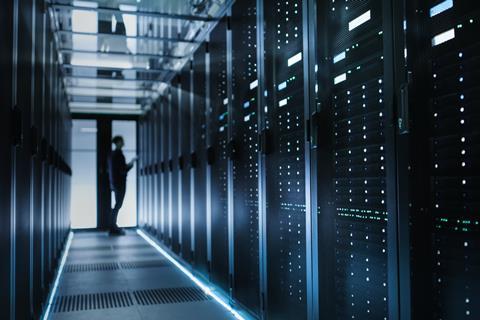 This migration online is generating mind-boggling volumes of data. “We currently have around 75 zettabytes [ZB] in the global datasphere, and that will have risen to 175ZB by 2025,” says Colm Shorten, senior director of data centre solutions at JLL.

“To put that in context, a single zettabyte has 21 zeros after it – equal to a trillion gigabytes. We have a continuous hunger for data and a major catalyst for this has been the pandemic.”

And all that data needs to be stored somewhere. “The global data centre market has grown at approximately 12% CAGR since 2019, and we expect it to continue to grow at just under this rate over the next four years,” says Jing Zhou, senior director for data centres, alternatives and strategic transactions, at Nuveen. “London is the largest market in Europe and the second-largest globally after North Virginia. It’s in double-digit growth year on year.”

But there’s a catch: data centres require vast amounts of electricity. They were responsible for 2.3% of global carbon gas emissions in 2020 (Gesi Smarter 2030). And as technologies such as the ‘Internet of Things’, artificial intelligence and augmented reality grow, so too will our energy needs.

So, with energy prices soaring and pressure on industry to green up mounting, what are data centre operators doing to cut their energy use?

Examples of ‘green’ data centres abound. The Verne Global facility in Keflavik, Iceland, is powered exclusively by geothermal and hydroelectric energy and uses the frigid north Atlantic climate to cool its servers. Opened in 2012 and acquired by D9 Infrastructure in 2021, it was purported to be the world’s first carbon-neutral data centre, with enviable power usage effectiveness (PUE) of just 1.21.

As Avison Young director of insight Lesley Males explains, this means that 1.21 units of energy are required for every unit of data stored. “PUE has become a globally recognised metric for reporting the energy use efficiency of data centres,” says Males. “It provides the ratio between total facility power and power consumed by the IT load.”

Since then, PUEs have been driven down further. Google’s facility in Hamina, Finland, and Facebook’s in Luleå, Sweden, claim to have hit PUEs of 1.14 and 1.07 respectively. In the case of Google’s facility, this has partly been achieved by using Baltic seawater to cool its servers; Facebook harnesses bracing winds blowing down from the Arctic for the same purposes. Both use 100% renewable energy.

Scott Newcombe, head of EMEA data centres for Savills, points to Norway’s Green Mountain Data Centres development. “These are some of the world’s greenest, with capability to utilise 100% renewable hydropower to operate the highly efficient facilities,” he says. “They are rated as tier-three facilities and offer a green alternative to traditional fossil-fuel-consuming assets. With a unique cooling system, the assets aim for a PUE of 1.”

No prizes for spotting a common theme among these examples. The cool climate and abundant natural resources of northern Europe make this region ideally suited for data centres, while the rapid advance of a global network of subsea cables allows such facilities to overcome connectivity issues relating to their remoteness.

“Data centres cluster in regions with low energy costs and cool climates or regions that are within close proximity to fibre routes,” says Richard Hamilton-Grey, head of sustainability for Europe and Asia-Pacific at Nuveen. “The closer the data centre is to the power generation source, the lower the cost per megawatt [MW], because there is less line loss from resistance and less physical infrastructure between the data centre site and the utility provider.

“Free cooling can be used in cooler and drier climates, and where increased temperature set points are used. Where refrigeration plant can be reduced in size – or eliminated – operating and capital costs are reduced, including that of the required supporting electrical infrastructure. Free cooling technologies should be considered for data centres; a cooling source can be outside air, chilled water, cooling coil, chilled tower or ground source from rivers, lakes and seawater.” 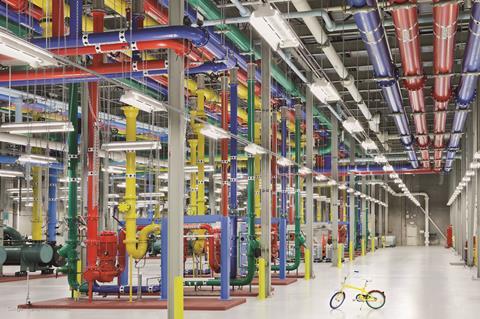 Centre of attention: Google’s facility in Hamina, Finland, has reportedly hit a PUE of 1.14

The north would never have become a focus for operators without big advances in the global network. “Subsea cables running under the Atlantic from the US to Ireland and from the Nordics to Europe do the heavy lifting that allow us to do those Zoom meetings or whatever,” says JLL’s Shorten.

“Terrestrial fibre-optic cables allow colocation data centres to triangulate with other centres over the cloud, so if there is a glitch, they can seamlessly pick up the workload. With the previous generation of data centres, if it went down you were goosed.”

It is not just the Nordics that are home to sprawling new green data centres. Telehouse South, a 330,000 sq ft facility powered 100% by renewables, opened in London Docklands in March, and Ark Data Centres says it is pushing toward a “carbon-neutral future” with its Longcross development in Chertsey, Surrey.

“Due to come online in 2023, the facility is designed to minimise carbon emissions and reduce waste and water consumption,” says Males. “According to Ark, its new facility will be future-proof in line with climate goals, with generators ready for hydrogen as the UK grid transitions from diesel. No carbon emissions or harmful pollutants will be released, and the facility will have a low PUE, too.”

Meanwhile, in western Spain, Savills has been mandated on a 35MW data centre development with future growth capacity of 70MW.

“The site has been designed to be powered by hydrogen and solar power,” says Newcombe. “Due to onsite power generation, the scheme is considered to be one of the first European carbon-neutral data centres outside the Nordics.”

The world doesn’t only need huge data centres in far-flung places, of course. To provide the seamless connectivity demanded by a generation that is used to interacting with people on the other side of the world on Zoom, Teams, Call of Duty or any other media, so-called ‘edge facilities’ close to where the end users are located are also required.

With the previous generation of data centres, if it went down you were goosed

“In terms of location, edge facilities will increase,” says Males. “Organisations will require a higher number of facilities and quicker data-processing services at the network edge. But of course, larger centres will still be needed as data usage is forecast to grow to three times that of today’s level in coming years.”

As such, the industry must continue to build efficiency and reduce the impact it has on the planet. Most agree that it still has a long way to go, pointing out that the above examples are by no means the norm. The average PUE in Britain is still somewhere between 1.5 and 1.8 and at the higher end of that scale for the rest of Europe.

PUE is not the only metric that needs to be considered, either. For example, vast amounts of gold, nickel and palladium must be dug out of the ground to build the tech that data centres require and must update periodically. These facilities also require significant volumes of water and create waste in their day-to-day running. All this puts pressure on the local and global environment.

“To steal a quote from the Uptime Institute survey, data centre operators give themselves a ‘fail’ for sustainability,” says Shorten. “And our own assessment informs us that we are still way off target, let alone having any consensus around well-defined KPIs to measure performance across the industry.”

In February 2020, the European Commission called for the data centre industry to become climate neutral by 2030. Progress towards this goal is measured against no fewer than five KPIs: energy efficiency (PUE); carbon usage effectiveness (CUE); water usage effectiveness (WUE); and efficiencies realised by reusing and recycling waste products and energy.

“Data centres can produce significant quantities of waste heat,” says Hamilton-Grey. “Locating them where there are available uses for waste heat can save substantial energy globally, with heat recovery being used to directly heat office or industrial space, hydroponic farming and even swimming pools and houses.”

The soaring price of energy is heaping more pressure on data centre operators and their customers to adopt more efficient practices – a point that is illustrated by Manchester-based cloud services partner M247 more than doubling its charges in January (the company cited energy price hikes). The European press is rife with reports of data centre operators struggling under the weight of higher energy prices.

“Since August 2021, the price of data centre electricity has quadrupled and Russia’s invasion of Ukraine caused further price spikes,” says Males. “Nonetheless, the spike in energy costs can be somewhat alleviated.

“For example, Bank of America has consolidated operating systems on its servers with the use of private cloud and virtualisation, while a reduction in data centre emissions has been achieved through space refinement, energy reduction and a green utility grid.”

If energy prices continue to rise, this may prove to be the biggest catalyst for the growth in green data centres yet.